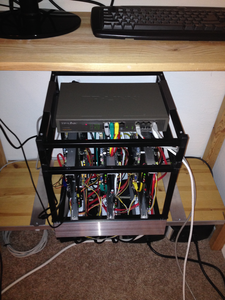 The Puzzle of Infinite MySQL

The status of this is 'write up', but the puzzle is real and the solution is real too

For a while now I was waiting that somebody (anybody) would make the next natural generalized step after Memcached. Alas. Nobody did it. They all are rehashing Memcached, not adding much power to it. The next step is (naturally) to blend caching layer with declarative layer, like 'make' did. Patentable, clearly.